Fawad Chaudhry’s brother assured the opposition to vote for Rana Sanaullah - 10bmnews Skip to content
I challenge them to show it by denying it, the government is playing a losing game, we have completed the number 172 in Parliament. PML-N President Rana Sanaullah’s tweet 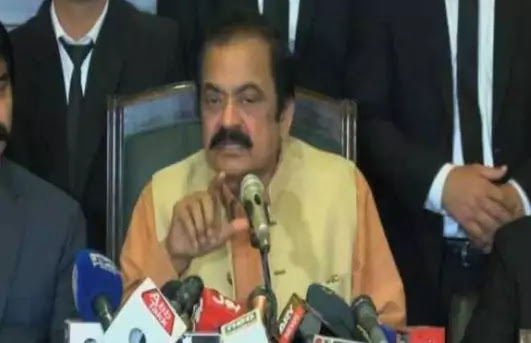 ISLAMABAD – Pakistan Muslim League-Nawaz (PML-N) Punjab President Rana Sanaullah has said that Fawad Chaudhry’s brother had assured the opposition to vote.
He said that Fawad Chaudhry’s brothers would vote for us. He said in his tweet on Twitter that the government is playing a losing game, they have 6 days left, we have completed the number 172 in the parliament, we will also get 3 votes of PML-Q.
Fawad Chaudhry’s brother has also assured us of a vote. I challenge you to refute it. On the other hand, Federal Interior Minister Sheikh Rashid Ahmed has claimed that the opposition will not be able to get 172 votes for the no-confidence motion against Prime Minister Imran Khan and the allies will return. But Imran Khan will win by voting.
Asked about the allies, he said that the MQM has sensible people and they will be ready. Sheikh Rashid Ahmed said that the situation is that the country is moving towards early elections. He said that Imran Khan is the last. Will play till the ball, Imran Khan will win in voting.
He said that there is a problem with Tariq Bashir Cheema’s constituency. Chaudhry will please Tariq Bashir Cheema. Regarding the angry members of his party, he said that a large number of angry members will return.
The club is. The Home Minister said that yesterday he had asked the Prime Minister to dissolve the Punjab Assembly. I have been saying for a long time that elections should be held. The election of the Chief Minister will take at least 10 days