Skip to content
HomeLatest NewsFaisalabad Traffic Police Bike Driving Program for Women
Under the program, about 60 women have so far been trained to ride motorcycles and have been issued learning driving permits. 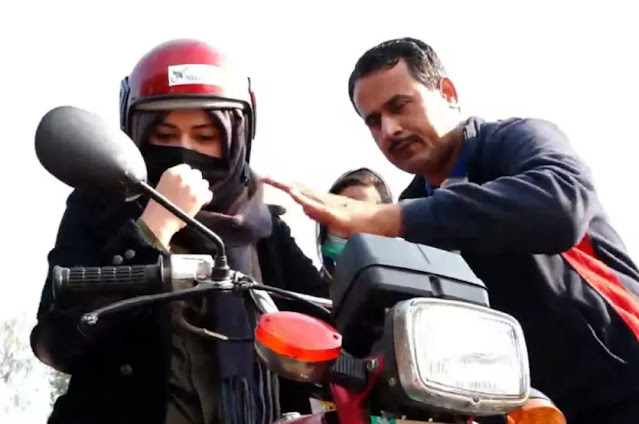 Faisalabad Traffic Police has launched a free motorcycle driving training program to empower women and reduce the difficulties they face during their daily commute.
Under this program, a large number of women and girls are being trained to ride motorcycles
They include college and university students, office workers, and housewives.
Anmol Fatima, a trainee of Noor Mohammad Ansari Industrial School, told Independent Urdu that she had to tell her brothers and father if she had to come and go.
Their only problem is we’re going to drop you off and bring you back. I wanted to be able to ride a bike so they wouldn’t have to suffer.
He said that he is very happy with this training because when he used to come and go to the handicraft school, he had to hear from his family members to drop out of school.
‘My father said,’ Son, we don’t have enough time to drop you off before we go to work in the morning, and then we go to work and worry about how you will get back, you have money. Are there How will you get home?
Mohammad Arshad Qasmi, administrator of Noor Mohammad Ansari Industrial School and general secretary of Social Welfare Society Ghulam Mohammadabad, while talking to Independent Urdu, said that the traffic police Faisalabad and Honda Motorcycle visited his school and offered female students to learn motorcycle driving. Was done
The four-day training was provided at the Traffic Police’s Ghulam Muhammadabad Center, as well as the technical training provided by Honda motorcyclists through videos and instructors he said.
He said that at present the fare from one stop to another has gone up to more than 30 rupees. Can’t even afford a rickshaw.
I would like to give a message to women that they must learn to drive a motorcycle so that they do not become a burden to their families in an emergency.
Faisalabad Traffic Police Public Relations Officer Muhammad Ismail while talking to Independent Urdu said that under this program so far about 60 women have been trained to ride motorcycles and they have also been issued learning driving permits.
The role of women in building and developing any country cannot be denied and it is a positive step towards empowering women, especially those who are working women she said. This has been done by the traffic police in collaboration with various companies.
He said that two conditions have been laid down for the women who wish to participate in this free training program, one is that they should be at least 18 years of age and the other is that they must have a computerized identity card so that they can Learner driving permit can be issued.
In this regard, women who want to learn to drive a motorcycle can register by contacting the Traffic Police Helpline 1915.
According to Mohammad Ismail, the traffic police is being assisted by Honda Atlas, a company that manufactures motorcycles, and their master trainers provide mechanical and practical training to women on motorcycles.
He said that in the training of motorcycle driving, the women are first trained on the ground with four-wall safety kits, and then as their driving improves, the master trainers allow them to ride the motorcycle on the road.