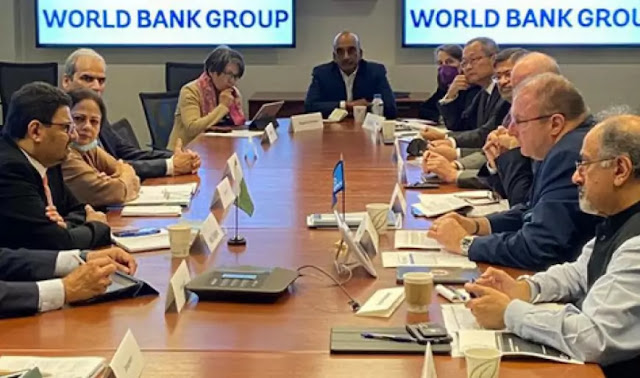 Pakistan’s Finance Minister Muftah Ismail, in a meeting with top officials of the World Bank in Washington on Saturday, requested cooperation in sustainable and comprehensive economic development in the country.
Muftah Ismail is currently on a visit to the United States to attend the 2022 spring meetings of the International Monetary Fund (IMF) and the World Bank Group.
According to Arab News, he also held important meetings with IMF officials and sought to revive the 6 billion stalled loan program.
Pakistan’s new finance minister on Friday signaled a rise in prices of petroleum products in the country, saying the IMF wanted to end fuel subsidies, and promised “targeted subsidies for the very poor.” Is.
Muftah Ismail met with Hartwig Schaefer, World Bank Vice President for South Asia, to discuss possible economic assistance to Pakistan.
In a tweet referring to the meeting, Schaefer said that the Pakistani delegation had sought the help of the World Bank for a key reform agenda for the country’s sustainable and comprehensive development. We focused on macro and financial stability energy sector reform renewable energy development climate-smart agriculture and sustainable land management he added.

Pleased to meet with Mr. Miftah Ismail of @FinMinistryPak and @AishaGPasha to discuss @WorldBank support for #Pakistan’s critical reform agenda for sustainable and inclusive growth.

Pakistan’s finance minister recently highlighted the new government’s economic agenda and priorities at an event hosted by a think tank of the Atlantic Council in Washington.
According to Muftah Ismail: We are a country that benefits the elite and almost every subsidy goes to the richest people. We can’t manage the cost of the endowments we are giving. So we need to reduce them
The Finance Minister informed the participants that despite the IMF program, Pakistan had failed to achieve the desired results, including increasing its foreign exchange reserves.
The IMF program usually gets some stability in the second year after tightening the ballot in the first year,” he said. In the third year, foreign exchange reserves usually increase and some stability begins to come
The opposite is true in Pakistan,” he said. We have lost a lot of foreign exchange reserves and the IMF program has been delayed. One of the reasons I’m here is to try to get the program back on track. “
Muftah Ismail said his government aims to bring economic and financial stability that can lead to recovery and development. He further said that the government would ensure that the development process was comprehensive while taking care of the poor sections of the society.