Skip to content
Home Latest News Details of the blast at Karachi University have come to light
The blast took place at 1:52 a.m. when 7 to 8 people were present in the van. 3 Chinese nationals were also killed in the blast. and 4 Rangers personnel were also injured in the incident. 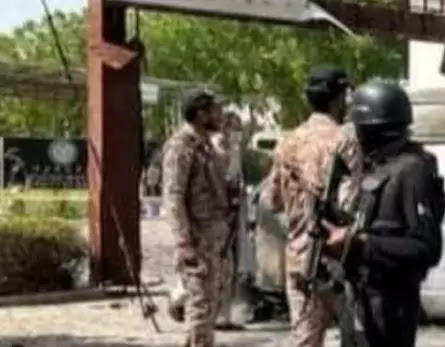 Karachi – More details of the blast at Karachi University came to light. According to media reports, DIG East Muqaddas Haider said that the blast took place at 1:52 pm. The blast also killed three Chinese nationals including two women and a man.
I am investigating whether the blast was sabotage or an accident. A bomb disposal squad has been called.
Police officials said that 7 to 8 people were present in the van. The blast also injured four Rangers personnel, all of whom were deployed on a motorcycle to guard the van.
Federal Minister for Information Maryam Aurangzeb strongly condemned the blast and said that the preliminary investigation report of the incident would be released soon. Improving the law and order situation is the first priority.
It is believed that 4 people were killed and several others were injured in the blast at Karachi University. A van carrying students of Karachi University exploded. The van was inside the Karachi University at the time of the blast.
Police and aid agencies rushed to the scene as soon as the blast was reported. Initially, reports of injuries were received from several people, but it was later learned that four people were killed in the blast. The voice was heard far away which would spread fear and panic among the people