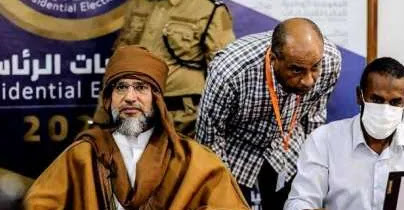 Tripoli – Saif al-Islam Gaddafi, the son of slain dictator Muammar Gaddafi, was accused of crimes in the Libya war and wanted by the International Court of Justice (ICC) As seen, he has registered for next month’s presidential election. According to the report, the first round of Libya’s first direct presidential election will begin on December 24, which was decided by the United Nations last year to stop the violence that began after the overthrow of Muammar Gaddafi in 2011.
It should be noted that Saif al-Islam Gaddafi is wanted by the ICC for alleged crimes against humanity. He said in a statement that Saif al-Islam Gaddafi had submitted his papers to the High National Electoral Commission office in Sabha to run in the presidential election. While reciting the verses of Pak, he thanked his helpers and said that may Allah have mercy on you.
In a photo released by the commission, Saif al-Islam is seen wearing a traditional gypsy dress while wearing a headscarf. Registration for Libya’s presidential and parliamentary elections began last week. Both elections will be held on December 24, but in early October, parliament postponed the date for the legislative elections to January. It was decided in the conversation I had.
Speculation about Saif al-Islam’s participation in the elections has been on the rise for months. It should be noted that he was sentenced to death by a Tripoli court in 2017 for committing crimes during the uprising. In an unusual interview, he said he wanted to restore Libya’s lost unity after decades of turmoil. I left the Libyan people for 10 years and now you need to come back slowly he was quoted as saying.
You need to play with their minds a little bit. From June 2014 until the interview, Saif al-Islam was never seen or heard before during a trial in a Tripoli court. Appeared. A Tripoli court had sentenced him to death in absentia, but the rival administration in the east had pardoned him in a case that Tripoli authorities had never confirmed. He has refused to be handed over to the ICC and was released in 2017. ICC spokesman Fadi Abdullah told Al-Ahrar television that Saif al-Islam is still wanted by the court.