Skip to content
HomeInternational NewsChinese student’s study style goes viral on the internet
Spread the love
The video of the student was made by her classmates who were studying late at night, the report said 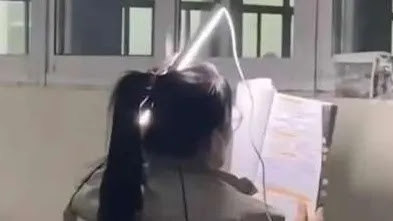 BEIJING – A student in China is being described as an example of hard work due to a video of her going viral, according to media reports. Has gone viral in which a female student is probably sitting in front of a pile of university notes and a big light is shining in her hair.
According to Chinese media, the video was posted on Weibo on November 12 from a university in the northern province of Hubei. He took a fluorescent light from a friend and stuck it in his hair so that he could continue his studies.
According to the report, the student was preparing for the annual Unified Graduate Entrance Examination in China, which is an entrance examination for the master’s program in China.
The video went viral on Weibo and became a hot topic of discussion as it was viewed 290 million times by November 14. Thousands of threads were created on the video where people commented on it.
This is not the first time that a student in China In 2020, a picture of a student at a Beijing university who was studying on a laptop while riding a bike went viral. In China, an estimated 3.7 million students Will take the entrance exam for the graduate program in mid-December