London (Monitoring Desk) The internet is full of prank videos these days in which pranksters can be seen doing very good things. Such a shameful act was recently committed by this British woman Prentix that you will be left speechless. According to the Daily Star, the woman, Regina Filanj, performed the prank on a hospital staff who was about to perform a colonoscopy on her husband.
In a colonoscopy, a camera device is inserted into the body through the patient’s anus. Regina found it ridiculous in this situation that she wrote a rak’ah and hid it between her husband’s hips so that when the doctors started inserting the device in her body they would get this rak’ah. Her husband was sleeping when he removed the gown worn by the hospital staff and placed this rak’ah in her body. 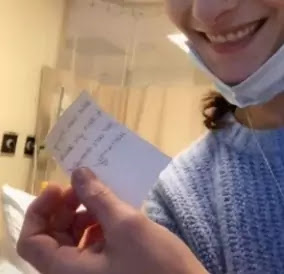 According to the report, Regina wrote on the cover: “We are trying to contact you to extend the warranty of your car.” Keep sending Nosrabazas used to force people to send their private information through text messages. Often this message comes to people who do not have a car. So this phrase would have been very popular and hundreds of memes were made on it
When Dr. Regina’s husband was taken to the operating theater, it became difficult for him to stop laughing when he found the rak’ah hidden in his ‘body’. Regina’s husband also started laughing. Regina herself narrated the incident in a video posted on her tick talk account @ regina_phalange1219. This video of hers is going viral fast, which has been watched by thousands of people so far