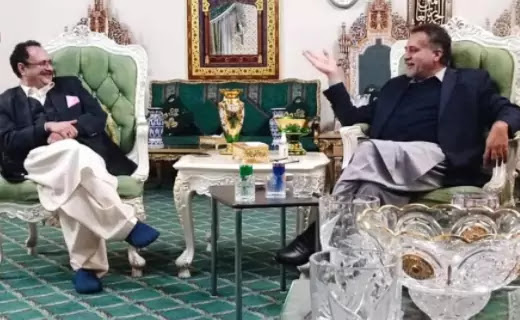 ISLAMABAD – President of the ruling Pakistan Tehreek-e-Insaf (PTI) Azad Jammu and Kashmir and most senior minister Sardar Tanveer Ilyas Khan has said that the performance of the Azad Kashmir government will affect the upcoming elections. With a little effort, Azad Kashmir can be made the axis of construction and development.
Tourism Authority is being set up for the development of tourism which will be approved in the next meeting of the Cabinet. Food Authority will also be set up to protect companies in Azad Kashmir. There should be regular registration of companies. Building codes should be drawn up. It will happen, but it will not work without it
Talking to Prime Minister Chaudhry Maqbool at his residence, Sardar Tanveer Ilyas Khan said that the PTI government has just come in Azad Kashmir from which people have high expectations. People voted for us because of Imran Khan’s views.
Yes, the people of Azad Kashmir are also tired of traditional politics, people want change so now it will not be a matter of just selling Kashmir’s name, Kashmir issue is not a land dispute but an issue of lives of 20 million people and all its ways Pakistan He said that all the rivers and canals in the region are being closed due to pollution, educate the people about the need to save the natural beauty, this requires legislation at the government level, in all developed countries including Europe.
It is a tragedy that in Azad Kashmir we are heading for destruction by deforestation, we need to harness natural resources locally, we need to use forests, rivers, herbs, fisheries.
Sardar Tanveer Ilyas Khan said that if we compare Azad Kashmir with Occupied Kashmir then there is war and strife, their mothers want to name their sons but Hurriyat never ends, all the leaders of Azad Kashmir together build and develop the region.
Think of it, with a little effort it can be made a hub of construction and development. If we can, we will be given even more. Major development projects will be started in Azad Kashmir from which we will get huge resources. We just have to stop corruption which will get huge resources.
Sardar Tanveer Ilyas Khan said that it is a tragedy that people are being provided with counterfeit and number two items, we have fake factories of big brands, I always put more emphasis on food authority to stop this double standard.
Diya, at one time Punjab Food Authority was under my control, I also played a role there, now I am trying to play my part in Azad Kashmir. He said that in the past, through statements, everyone has flowed streams of milk and honey, big claims have been made by going abroad, I say to the claim that these people do not find any famous person there, meet ordinary whites.
There are pulls, our people are out for years, we have not been able to create a future for them here, the difference between humanity and animals is to help each other.
Tanveer Ilyas Khan said that it is a tragedy that there is no model hospital in Azad Kashmir, from there people are forced to come to Islamabad PIMS and Holy Family, we try to do what we can for the common people.
Sardar Tanveer Ilyas Khan expressed deep sorrow over the demise of Syed Ayaz Jafari, brother of Chairman Jammu and Kashmir Jafaria Council Syed Riaz Hussain Jafari and offered condolences to his family and prayed for complete forgiveness of the deceased.