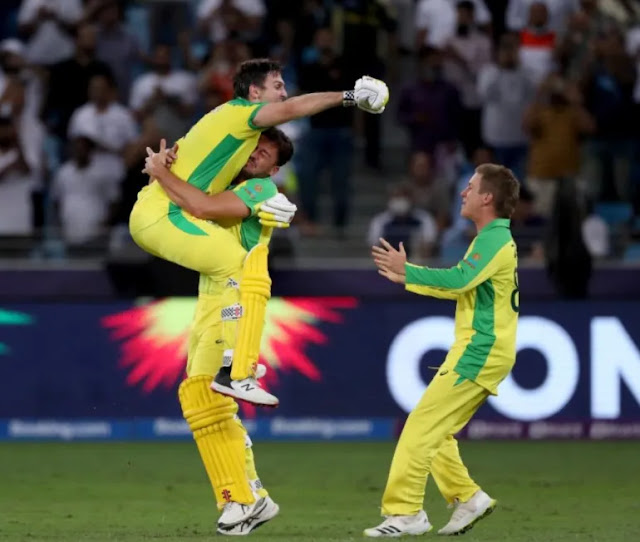 Australia won the ICC Men’s T20 World Cup for the first time by easily beating New Zealand by eight wickets on Sunday.
Four-time ODI World Cup winners Australia won the toss and elected to bat first in Dubai today. New Zealand scored a challenging 172 for four thanks to a brilliant 85 by skipper Ken Williamson. William Sun, whose catch had fallen to 21 runs, showed excellent performance after playing well in the beginning and scored 85 runs off 48 balls.
This was his first half-century in the tournament. New Zealand’s first wicket fell at 28 and the second at 76. Williamson teamed up with Glenn Phillips for the third wicket for 68 runs, which provided the basis for a big score.
Among the Australian bowlers, Josh Hazelwood bowled brilliantly and took three wickets for 16 runs. Apart from them, only Adam Zampa could take one wicket. In response, Australia did not start well and Aaron Finch returned to the pavilion with a total score of 15.
David Warner and Mitchell Marsh added 92 valuable runs for the second wicket. Warner made 53 off 38 balls and was bowled by Trent Boult
Marsh teamed up with Glenn Maxwell to ensure that New Zealand did not become a threat. Both openly beat the Kiwi bowlers and never let them dominate. Marsh scored 77 and Maxwell scored 28. Bolt took two wickets for New Zealand.
Today’s final match was one of the top trends on Twitter and users made some interesting tweets. A meme was shared in a tweet from a handle named Tayyaba Razzaq, which read: ‘Pakistanis’ hopes and reality about Sunday’s match

The “Memes by Zen” handle shared a meme about the subcontinent’s “mood” of the final, which read, “Is this also a final, brother?”

In a tweet from J Chauhan 2705 handle, the situation of the fans of the subcontinent was described in which “whoever wins, cricket will win” was described as the best option.