Skip to content
Home Latest News At Christmas, a stranger rained money on a waitress so much so that he couldn’t help but tell a story

NEW YORK (Monitoring Desk) – A stranger in the United States, after eating at a restaurant, tipped a beautiful waitress so much as a Christmas present that the waitress was not happy. According to The Sun, the 21-year-old waitress named Sarah tweeted about last year’s incident, saying that a man had given her a hefty sum of 20 2,020 at Christmas last year. 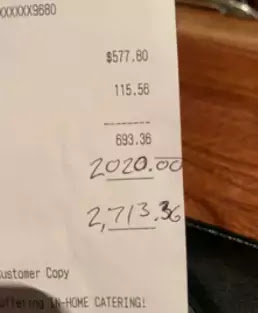 The man gave the tip as compared to last year’s ‘Sal’ (2020). His food bill was 69 693.36, under which he himself wrote 2020.00 and by adding this tip amount to the bill, he wrote the amount of 2,713 at the end. Sarah also posted a picture of the receipt in her tweet. Sarah’s tweet is going viral which has been liked by more than 300,000 people so far
Read more: The man traveled hundreds of miles to reach his own wife