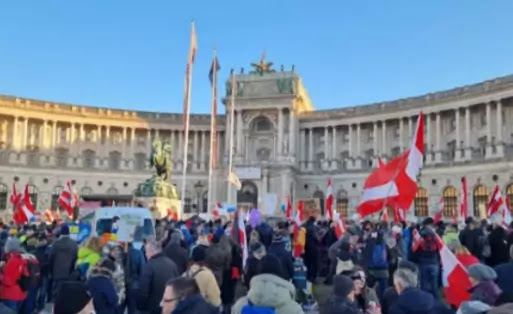 Vienna – An anti-Corona demonstration took place on the evening of January 15 in the central red area of ​​the Austrian capital Vienna at the Helden Platz in Vienna in which anti-government political parties and their activists participated in full force.
About 40,000 people attended the last anti-Corona demonstration, which was significantly less than the previous anti-Corona demonstration. Arriving at Helden Plots, the administration closed the Ring Road to all traffic, and the protesters marched on a large trolley with loudspeakers chanting anti-government slogans and criticizing the forced corona vaccination.
According to police spokesman Christopher Verhanjak, the arrest was made because a worker refused to wear a mask despite several requests.
The anti-Corona demonstration program once again benefited Herbert Nickel, head of the FPÖ political party, who once again praised Austria, the federal government, and, above all, Prime Minister Carl Nehmer. Promised to do everything possible to prevent vaccination.
Police said in a statement, many participants in the rally appeared in the uniforms like the police who were seen in the form of real police uniforms. The police stopped the police and after the legal proceedings, the police had to get rid of the police.
The statement said that during the first police operation on Saturday evening, a woman held a banner with a picture of Adolf Hitler in the demonstration. The banner has been saved and legal action has been taken against the woman on suspicion of violating the prohibited law.
The initial balance sheet includes arrests on suspicion of violating prohibited law and resistance to state authority, as well as some arrests and 565 reports for ignoring the need for masks.
Despite the tense situation, no policeman was injured. Two arrests were made during the demonstration around 2 p.m. – including against an administrator who did not wear an FFP2 mask despite a police request, and another for carrying Hitler posters and banners.
In the demonstration. A group of fake police officers who were present with fake police uniforms fraudulently joined the protest. They were carrying pepper spray, handcuffs, and cable ties. A police officer checked them and they revealed Is he a self-proclaimed “bodyguard” who has already been notified by the administration?
Read more: Another bad day for the Houthi rebels the Arab League operation took a heavy toll