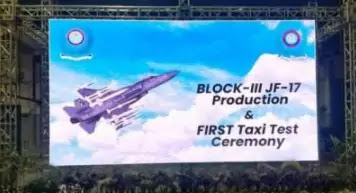 ISLAMABAD – Pakistan has achieved another milestone in the field of defense by developing the Block 3 version of the JF-17 Thunder aircraft, the JF-17 Thunder block with the latest radar developed locally. The Three Single Engine is a multi-role fighter aircraft capable of hitting 4 targets simultaneously by hitting 15 targets simultaneously.
92 News quoted sources as saying that the Block 3 version of the JF-17 Thunder aircraft has been developed locally. Capable of successfully hitting 4 targets by identifying 15 targets, the first squadron of Pakistan Air Force Block III aircraft will form part of the air fleet.
Earlier, regarding the acquisition of Chinese-made J10 fighter jets, it was reported that next year, China’s state-of-the-art J10C fighter jet will be added to the Pakistan Air Force’s fleet, equipped with advanced J10C technology.
It is a single-engine, state-of-the-art Delta Wings fighter jet equipped with multi-target targeting technology and missiles capable of hitting targets up to 200 km away. In July this year, sources said that Pakistan was seriously considering increasing its air defense capabilities.
It was claimed that Pakistan would acquire modern J10C fighter jets from its brotherly country China. A report released in July stated that a total of 36 J10C fighter jets would be procured by Pakistan from China.
Officials from both countries have been in talks since last year over the supply of aircraft. It was further informed that during the recent aerial exercises, Pakistani pilots have also gained experience in operating J10C.
Chinese Air Force troops had a special participation in Pakistan and China’s Shaheen 9 air exercises, modern Chinese J10C and J11B fighter jets participated in the exercises, while Pakistani pilots flew the two Chinese fighter jets.
Gained experience operating. According to defense experts, the Chinese J10C fighter jet is a Rafale collision fighter aircraft acquired by India. After the acquisition of this aircraft, the superiority of the Pakistan Air Force over the Indian Air Force will become clearer.