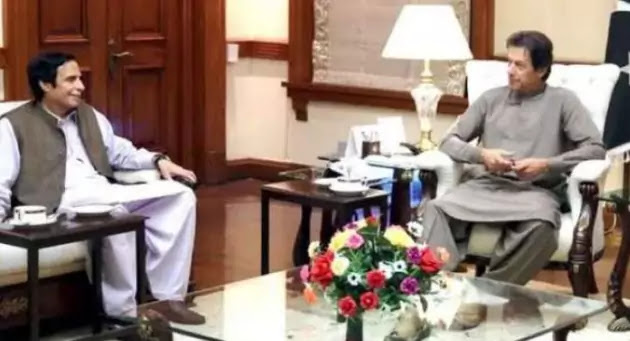 ISLAMABAD – Thanking Prime Minister Imran Khan for nominating him as Chief Minister, Chaudhry Pervaiz Elahi said that he would fulfill his trust and the PML-Q would co-operate fully with him as an ally.
According to Dunya News, PM Imran Khan had a meeting with PML-Q central leader Chaudhry Pervaiz Elahi, in which PM Imran Khan said, I congratulate you, Usman Bazdar has resigned, on behalf of his party I nominate you as the Chief Minister of Punjab.
Speaker Punjab Assembly Chaudhry Pervaiz Elahi expressed gratitude toward Prime Minister Imran Khan. Chaudhry Pervaiz Elahi said that he would fulfill his trust and the PML-Q as an ally would extend full cooperation to him.
On the other hand, senior PML-Q leader and Federal Minister for Housing Tariq Bashir Cheema has resigned from the ministry. He said that he has left the federal cabinet and now he will vote against Imran Khan. Will
Tariq Bashir Cheema is a senior leader of PML-Q. PML-Q central leader Tariq Bashir Cheema while talking to Kashif Abbasi in ARY program said that South Punjab is selling thieves to the province.
In the presence of courage, I was bitter to give my message, that I can not vote for them, the whole family of PML-Q is my benefactor, I know my times, they always put their hand of compassion on me in difficult times. ۔
I decided not to vote for Prime Minister Imran Khan months ago. We have been drinking all kinds of poison for the sake of Chaudhry Pervez Elahi. We will continue to fight with him he said.
I am not going anywhere, I am with both Chaudhry Shujaat and Chaudhry Pervaiz Elahi. Tariq Bashir Cheema said that I will not say anything that would make my leadership feel that I am out of time, I decided to resign quietly and informed my leadership.
He said that if Chaudhry Shujaat wants to go with PML-N, then Chaudhry Shujaat or his children can give the answer.
Everything that has been said today is a development to date. The offer of the Chief Minister has come today. They are giving us the Chief Minister to tarnish the image of PML-Q