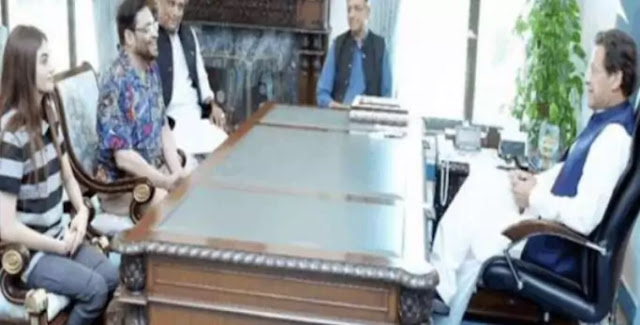 ISLAMABAD – Pakistan Tehreek-e-Insaf (PTI) National Assembly member Amir Liaquat today called on Prime Minister Imran Khan. Amir Liaquat also shared a photo of his wife meeting with the Prime Minister. Federal Minister Asad Umar and Federal Minister Ali Zaidi were also present in the photo.
Aamir Liaquat tweeted on social networking site Twitter that During the meeting, my wife Syeda Dania Amir was also present for a while. She said that the Prime Minister congratulated her on her marriage and asked, “Does Amir care or not? Dania smiled and said, You are very caring. Also have

After meeting the Prime Minister, Amir Liaquat also spoke to reporters.
The journalist asked, Did your sister-in-law make you a friend of Imran Khan? Replying to this, he said that there was friendship even before Imran Khan, the friendship was not over but no decision has been taken yet regarding the vote. Imran Khan is hopeful that the no-confidence motion will fail.
Aamir Liaquat further said that Imran Khan congratulated me on my marriage and I met him along with his wife.

Earlier, in his video message to Prime Minister Imran Khan on Twitter, he said that the attack on Sindh House has tarnished the image of PTI. We have not been the guardians of democracy. Let those who have to go, those who are yours are with you.
You yourself had said that if you have to sit in opposition, you will sit. No matter, the opposition is also a good thing. The Prime Minister should be in Sindh House. What happened should be condemned.
All the members of the Assembly in Sindh House were deviant but they were our own. These mullahs who have come within their hands, sit them down and tell those who have arrows, if they start raining, it will be a big problem.