Children will die but Kashmir will not become a province. What is the foreign policy of living in sports? He used to walk around the cricket ground without beating the people. Address by Central Vice President PML-N 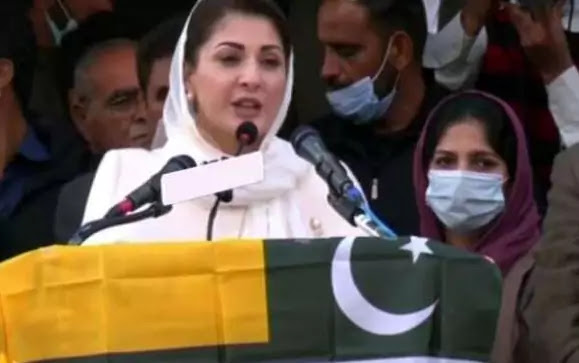 Muzaffarabad – PML-N Central Vice President Maryam Nawaz has said that after occupied Kashmir, now Azad Kashmir is being prepared to be cut, every child will die but Kashmir will not become a province. What should be the foreign policy of living in sports? He used to walk around the cricket ground without beating the people.

Addressing an election rally in Pattaya, he said that greetings to Nawaz Sharif and Shahbaz Sharif, sons of Kashmir, Mian Sahib told me to go to Kashmir, there is no danger to you in Kashmir, my whole family is Kashmiri, Neelam also came in 2011. I was not in politics then. Like Nawaz Sharif, I will share in your every sorrow. Imran Khan tried to buy Shah Ghulam Qadir in this constituency.

Only PML-N has public representatives. Maryam Nawaz said that after selling Kashmir, from which mouth are you coming to Kashmir? After throwing Kashmir in the swing of India, with which mouth are you coming in front of Kashmiris? I want to ask Imran Khan that Kashmiris who were martyred in occupied Kashmir, mothers, and sisters were raped. Who gave you the right to excuse these sacrifices? The sun of selection is setting in Pakistan, the sun of selection will not be allowed to rise in Azad Kashmir, after throwing occupied Kashmir in the swing of India, now preparations are being made to cut Azad Kashmir, every child will die, not Kashmir province What is the foreign policy of a person who has spent his entire life in sports? He used to swing the bat in the cricket ground, today he has beaten the Pakistani people with the same bat, he wants to bring the journey of incompetence to Kashmir.

The foreign policy was to sit next to Trump and say that Trump will mediate, Kashmiris are right to ask, was this Trump’s mediation? Kashmiris and Pakistanis are waiting. When will the 2-minute silence be broken? He said that the money to buy votes is for foreign funding or money for selling Kashmir. Imran Khan threw occupied Kashmir in the swing of India. Whoever throws Kashmir in the swing of India will give his destiny in his hands? The day will come when we will win the case of Occupied Kashmir under the leadership of Nawaz Sharif