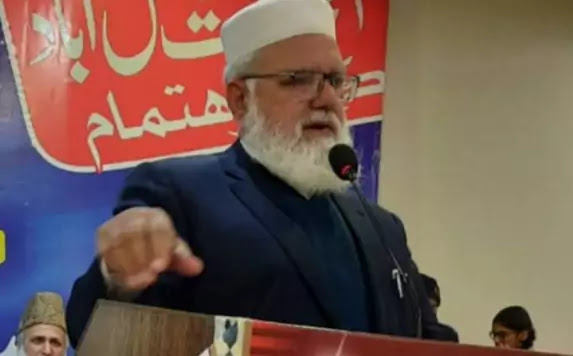 Faisalabad – Deputy Ameer of Jamaat-e-Islami, former parliamentary leader Liaquat Baloch has said that the money budget imposed on the nation under the orders of the International Monetary Fund (IMF) is a shackle of economic slavery, mortgaged the national economy.
It is reprehensible to amend the Finance Bill, which was passed under the auspices of the State Bank of India and indirectly placed under Indian supervision. Will continue to suffer. Prime Minister Imran Khan is not listening to the voice of national leadership, economists, and oppressed people due to stubbornness, ego, and bigotry.
Inflation, unemployment, production costs, and inflation will rise. The purchasing power of the people will be exhausted. Self-reliance, self-reliant Islam’s economic system is the only way out of the economic crisis
Addressing the Ittihad-e-Amit Ulema-e-Mashaikh Conference in Faisalabad, Liaquat Baloch said that the government has mortgaged the national economy with the worst agreements with the IMF. The supervision of the State Bank of Pakistan is being handed over directly to India. The system of justice can be found only on the basis of monotheism.
Honor is the standard of humanity, if scholars, teachers, madrassas continue to create mutual distances in the promotion of their respective sects, then sectarianism will destroy the new generation of civilization, morals and human values, great victory in Afghanistan, and the faith of Kashmiris, Palestinians The unity of the Ummah is demanding the protection of freedom
He said that US-NATO forces want to hide the humiliation of their defeat in the chaos of the Ummah, Islamic teachings should be promoted among the people, Islam wants complete eradication of the curse of feudalism, exploitative capitalism, Islam power over human beings through parliament.
He wants the sovereignty of Allah, not of human beings. Parliaments of Muslim countries are bound to legislate according to Qur’an and Sunnah. Yes, Ulema Mashaikhs will not allow Pakistan to become a secular state at any cost